A Dangerous Harbor
#1 in this Romantic Sailing Mystery Trilogy 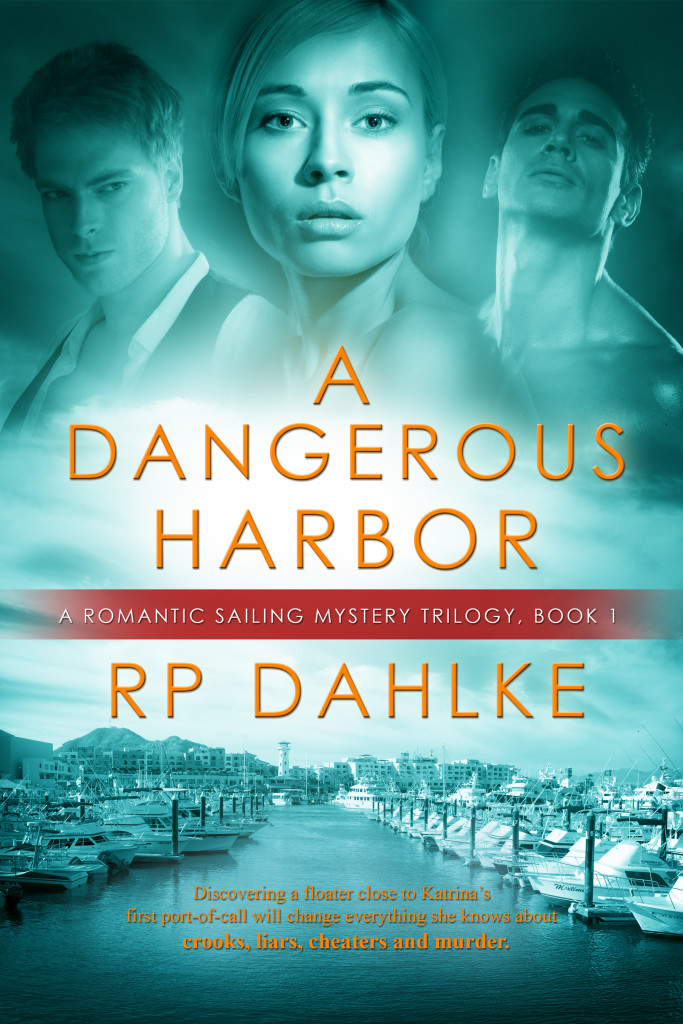 When Katrina Hunter is forced to shoot her sister's stalker, she takes the required leave of absence from the SF police department as her one chance for a long over-due sailing vacation. But discovering a floater close to her first port-of-call in Baja, Mexico will change everything she knows about dealing with crooks, liars, cheaters and murder.

Except for the mermaid on a weedy patch of sea grass ghosting in her wake, Katrina Hunter's solo sail into Mexican waters had been monotonous and uneventful. And now her thirty-two-foot Westsail was on a leisurely stroll with only the current and the thrum of the auxiliary engine for companionship—except, that is, for the mermaid.

Katrina rubbed at gritty eyes, the result of too little sleep and too many hours at Pilgrim's helm. "Sure it is. Last night it was Mickey Mouse reciting Robert Frost on top of a following wave, so why not mermaids?"

Shivery, bleary-eyed and slow, she blew at cold, stiff hands, then reached over and tapped at her handheld GPS. Arrival to her destination at the port of Ensenada in forty-five minutes, it said.

She peered through the early morning light at the sun-fuzzed tan cliffs of Baja. The bare corduroy hills folding onto themselves, then breaking apart, humped up again into another cluster of barren monotony. Bored with the dull scenery, she cupped a hand over her brow and glanced back at the patch of weed again.

Like all solo sailors, Katrina talked to herself. And in this case, it was more to ease her worried mind than for the sheer entertainment of hearing her own voice.

"Definitely not Mickey Mouse. It's a busted white fender stuck on some seaweed, that's all it is."

Rubbing at her tired eyes again, she peered at the seaweed wallowing in her wake. The white plastic fender was now a pale arm swimming in slow, lazy strokes, moving to some genetic Latin rhythm.

There was also a head with long dark hair and a body to go along with the arm.

"Yeah, and gold watches are this year's accessory for every boat fender. Shit!"

Katy swatted at the clanging alarm going off in her head—that litany of cautionary instruction drilled into her by her superiors when they heard about her solo sail to Mexico. Never mind that she'd been sailing since she could stand, or that she was frequent crew for any racing regatta on the San   FranciscoBay. She was one of their own, or would be if her paid leave of absence played out as intended.

There would be no calling the American Coast Guard now; she was already too far away from San Diego and the American border. She stoppered her ears against getting involved with even the slightest whiff of trouble while she was in Mexico and stabbed at the Man Overboard button on her GPS, marking her exact location.

Yanking at the furling line of her jib until it curled obediently onto itself and crabwalking forward, she uncleated the main and let it drop into the lazyjacks, worked her way back to secure the boom into its cradle, dropped down into the cockpit and shoved the tiller hard until the bow was aimed at the patch of weed, then tied off the tiller, idled the throttle, and with boat hook in hand, waited for the patch of weedy sea grass to slide across her waterline.

Katy leaned over and deftly nudged the weedy raft around so that its reluctant passenger was facing her, and then ever so gently pushed back the wet strands of black hair. Dark winged brows stood out in stark relief on pale olive skin. It was a girl, maybe all of sixteen, she guessed.

"Where'd you come from?"

As if to answer at least part of her question, the ocean swelled, lifting up the maiden's bier until Katy was looking into slightly open eyes. There were no petechiae, the telltale red dots freckling the cornea and typical of strangulation.

"Not strangled, but still…."

A frothy red bubble clinging to a nostril and a few more at her mouth said drowned, but not in the water very long as the limbs were still pliant and the skin wasn't bloated or damaged by fish or sea birds.

Katy noted the time as seven a.m. for the investigation that was clearly going to happen, and gave her guess at a couple of hours earlier, which would put the death about three or four a.m.

"Did you fall off a party boat, my little mermaid?" She lifted her head to scan the horizon for any sign of a disappearing yacht or cruise ship.

The empty horizon made her sad and then angry, but not at the dead girl. Detective Katrina Taylor Hunter, recently of the San Francisco Police Department, would never be angry at a victim and certainly not one so young. "All right, let's get this over with," and she went below to twist the dial on her marine radio to 2.182 MHz and did as she was trained to do when finding dead bodies in Mexican waters—called the Mexican Navy.