A Dead Red Oleander
#3 in the Dead Red Mystery Series 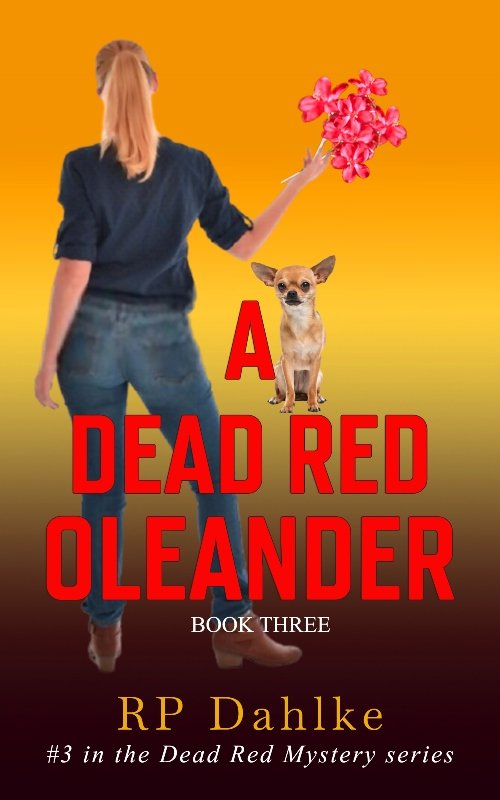 Nominated for The Global Book Award, 2014.

When a late in the season emergency forces Lalla Bains to accept a greenhorn ag pilot for her dad's cropdusting business, she sighs in relief. After all, he comes highly recommended, his physical is spotless, and with a name like Dewey Treat, what could possibly go wrong?

Then her quirky relatives arrive from Texas and things go south in a hurry: Dewey Treat drops dead, his tearful widow claims he was murdered, clobbers Sheriff Caleb Stone with his own gun, and makes a run for it. Lalla, convinced the widow is innocent, sets out to prove it—against the express wishes of fiancé Caleb Stone.

Feds, local law, suspicious ag-pilots, nutso relatives, and her daddy's new sidekick, Bruce the goat, make life a living hell for Lalla. Will her nosey nature solve the crime and save the day? Or put them all in mortal danger?

The world is flat. I know it is, because for the last five hours the view has been exactly the same. Only the sun has done any traveling, working its long shadows through straight lines of harvested cotton.A few crows shop the furrowed rows for worms, weevils, and grasshoppers. One hops over to inspect the truck I'm lying under, cocks a beady black eye, probably attracted to the shiny metal police-issued handcuffs, my hand in one of the cuffs, dangling from wrist to arm, and finally down to me, Lalla Bains, aero-ag pilot, sometime busybody, meddling where I shouldn't—again. I'm dirt smeared and sweaty, thinking if I get out of this alive, if the killer doesn't return to finish me off, I'll foreswear all future sleuthing. My dad, Caleb my fiancé, my best friend Roxanne, and half of Stanislaus County will be pleased to bear witness to that promise.

I will, this time. Really, I will.

I waggle my grubby, unpainted, and unadorned fingers at the crow. Too bad I didn't have on my engagement ring; maybe I could get him to peck at the lock mechanism and open it. Yeah, right, and while I'm hallucinating, maybe get him to bring me a nice cold Pepsi.

I never wear the ring when I'm working, and I'd worked today, starting at three a.m. as I usually do during the long hot season of flying cropdusters. I spread chemicals over cotton fields like this one to keep the aforementioned weevils from devouring the plants. Today was my last flight, and probably my last job as an aero-ag pilot, since my dad's business will soon be absorbed by another, larger outfit in Merced.

The crow is unimpressed with my status—after all, I'm the one recumbent under a truck, unable to move. His sharp black eyes take in the cuff and then my hopeful face. Any interest he may have had in my predicament is answered with a fluff of wings, and I swear—a wink. Then he flaps up on to the hood and his sharp claws rat-tat-tat across the top of the cab. He lands in the empty bed of the truck and a quick, sharp, whistle says he's found that wadded up McDonald's bag from yesterday. Yesterday, when I still had a life that didn't include murderous suspects. He fusses at the paper bag for a few more minutes until it's agreed there's nothing left but a greasy wrapper. I hear his wings flap again, and wheels up, he flies off to the freedom I can only dream about.

I roll onto a shoulder so I can look out from under the truck. North. We're facing north, where I've been hooked up and alone for most of the day, without water, a cell, or hope.

I follow the tracks as they roll over the berm, cutting twin ruts in the banked up earth, the crazy, jigsaw pattern of my reckless descent. Trucks and drivers intent on dinner, home, family whiz past—I wish I were one of them.

Someone could notice. I think. There are those lines leading down through the harvested cotton and finally to me under my dad's old Ford. That is, if the driver in one of those big semis took his eyes off the road, and turned his head for a quick glance at the dry, flattened, and totally unappealing two hundred acres. I'm sure he would see the hump of a faded blue cab sprouting like an odd weed in the sea of cotton. I sure wouldn't give it a second glance.

A car slows and rolls to a stop. A door slams. My heart quickens and in the heat of late summer a feathery light shiver of fear runs across my skin. I lie waiting.

I hear dirt clods tumble as footsteps make their way through the ruined plants, a curse as one sticks to his pant leg. A pair of brogues—black, with enough shine on them to reflect part of a tan pant leg with a navy blue stripe. His knees pop as he squats, and he eyeballs my cuffed wrist to the bumper, and finally to the rest of me, snuggled in between the row of cotton under the 1958 rusted bucket my daddy refuses to part with.

He removes the California Highway Patrol cap, and first thing I notice are the stripes on his sleeve—a sergeant, maybe someone bright enough to figure out I'm not a criminal.

My blonde hair, which usually counts for a few points with most men, is presently adorned with cotton stems and fluffy balls. The rest of me is streaked with dirt. Not my best look.

We stare at each other for a minute.

I'm parched. My lips are cracked, my tongue is dry, and it sticks to the roof of my mouth. I need that Pepsi, maybe a rum and Coke, before I can possibly say a word. I swallow, thinking nothing will come out.

But then he does the one thing guaranteed to fix my pipes.