A Dead Red Cadillac
#1 in the Dead Red Mystery Series 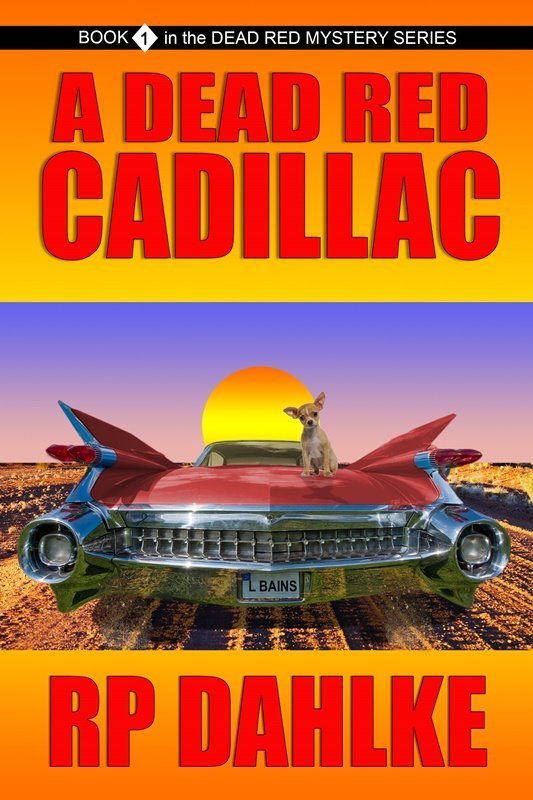 "I've been married so many times, they should revoke my license," says NY model, and reluctant pilot Lalla Bains.

Running her dad’s Crop-Dusting business in Modesto, California she’s hoping to dodge the inevitable fortieth birthday party. But when her trophy red ‘58 Cadillac is found tail-fins up in a nearby lake, the police ask why a widowed piano teacher, who couldn’t possibly see beyond the hood ornament, was found strapped in the driver’s seat. Reeling from an interrogation with local homicide, Lalla is determined to extricate herself as a suspect in this strange murder case. Unfortunately, drug running pilots, a cross-dressing convict, a crazy Chihuahua, and the dead woman’s hunky nephew throw enough road blocks to keep Lalla neck deep in an investigation that links her family to a twenty-year old murder only she can solve.

"Can you hear me, Miss Bains?"

"Yeah, I can hear you." I was lying on the ground, my shoulder hurt like hell, and when I tried to get up, my leg buckled under from the pain. I looked up at my Ag-Cat, its fat nose cone planted deep into a row of tomatoes like some giant burrowing beast.

I groaned at the conflicting emotions—I didn't make it as far as that restricted airstrip I was hoping to land on, I'm alive, but when my dad sees this he's going to kill me.

Then I passed out.

The voice intruded again. "Do you know where you are?"

"On your nice private airstrip? Took you long enough to make up your mind. So shoot me or wait till Noah Bains sees this and he'll do it for you."

The guy chuckled. "You're going to be okay. You're on your way to the hospital, Miss Bains, but we'll see that your dad is called the minute we get there."

I was in an ambulance. The speaker was an EMT, and we were bouncing along a road, sirens and all.

"Can you cut the siren?" I asked. "It's giving me a headache." Then I passed out from the pain in my shoulder and leg, oblivious to the sound of sirens or the memory of rude airstrip owners.

My dad came in to stand by my bed and quietly pulled the sheet down over the white cast on my foot.

"Hi, Dad. Did you get the Ag-Cat pulled out of those tomatoes yet?"

"This morning. How're you doing?" He took a peek at the card on the bouquet of daylilies, snorted, and then moved them over to set down my book, West with the Night by Beryl Markham. At sixteen I  wanted to be just like her. Subtlety not being his best suit, Dad thought it would help me recover quickly.

I wiggled my toes in the cast. "Doctor says I have to take this home with me, but the shoulder won't need surgery. So, how bad is she?"

"Fixable. It was nothing you could've foreseen. Cylinder’s cracked. Must've opened up during your flight home."

It was as near as Noah Bains was ever going to get to saying it wasn't my fault. I breathed a sigh of relief. As a pilot, I always do my own pre-check on my plane, and I'd missed it.

"Caleb and Roxanne were here earlier, but you were still asleep."

I nodded, picking at the sheet. "That airfield I almost got to land on yesterday, you know that guy?"

"He wasn't very friendly, considering that I was coming in on a wing and a prayer."

"The hell you say!" His mouth tightened and his bushy gray eyebrows lowered. "What was he thinking?"

"I have no idea. It was marked private strip. But I was kind of running out of airspace while he considered whether he should let me land or not. Is he still in the industry?"

Dad quietly pulled on his lower lip, then said, "Kind of a spoiled kid as I remember. I think he took over when his dad retired. I don't keep up with who's doing what since that's your end of it now, but I'll have a word with him."

"Don't. Please. We don't need to make enemies with anyone in the business. When I get on my feet again, I'll go out there, thank him for offering to let me land on his airstrip."

My dad tipped a gray eyebrow at the irony. He knew I could handle John Machado. I'd handled worse characters since becoming a pilot for my dad's outfit, and with only the occasional minor correction to my work orders, critiques, and reshuffling of customers to suit his own preferences, he pretty much allowed me to run the business all by myself.

I'd earned my seat the hard way, and if the pilots and farmers we worked with didn't like me, they at least respected me. I wasn't so sure my father actually respected me, but I was the next best thing he had to a son and heir.

Taciturn, irascible, and laconic by nature, he'd withdrawn like a hermit crab into his shell when my mother died. Not till Leslie, my brother, hotfooted it to San Francisco to live his dream as a set designer for the Civic Light Opera did Noah Bains believe his only son would refuse his rightful place with his dad. I, on the other hand, was just another cross the old man had to bear.

I was studying my unpainted toenails sticking out of the cast when I realized he was talking.

"You asked about Machado? I said he bought Hollander Chemical Company a few years back."

"Oh, we use them, don't we?" I was only half listening because my childhood friend, Caleb Stone, was standing in the doorway, tension and relief skimming across his face. His sheriff's uniform was wrinkled and sweaty, his face flushed from the summer heat, but he was here, and the sight of him instantly lifted my spirits.

Noah was still talking. "I wouldn't know who you deal with these days, because as you well know, I'm a convalescing heart patient."

I ignored his complaint and motioned that he should move over and make room for Caleb. I forgot all about Machado and Hollander Chemicals as Caleb and I kidded with each other about who was the biggest klutz.

Later, much later, I would wish I hadn't let the question about John Machado slide.